Edwin Potter (junior) was the son of Edwin Potter the horse bus operator and also the mother of May Potter who became Mrs Elisha.

Amongst many jobs he had one was as a member of the ground staff for Dauntsey’s School. It fell his lot to produce a handy footpath so that the boys (the school was boys only in those days) could walk easily from the main site in West Lavington to the former Manor House in Market Lavington. The path he built started on the main road between Market and West Lavington and had to cross the Broadwell stream and the Northbrook before reaching the manor. Edwin constructed flights of steps to go in and out of each of these two steep sided valleys. He was obviously proud of his work for our photo shows him with a broom, keeping his walkway clean and tidy. 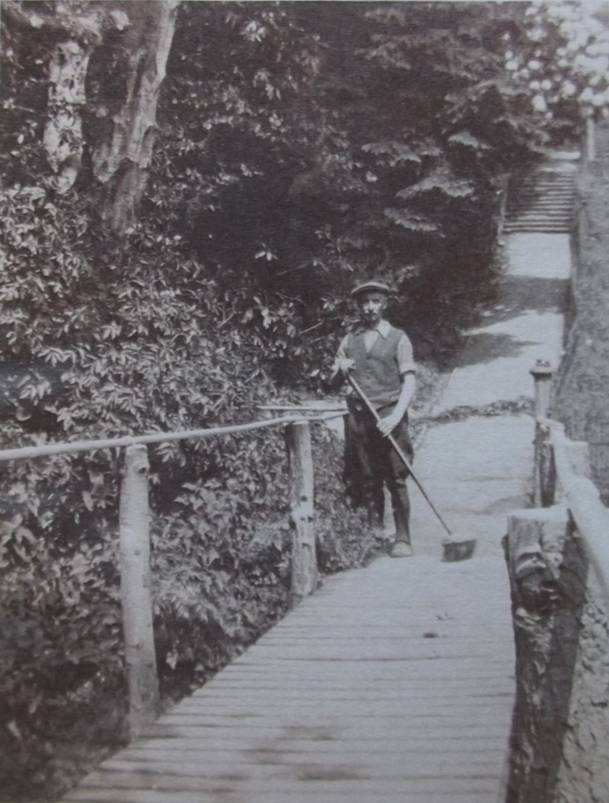 Edwin Potter of Market Lavington cleans the path he made to the old Manor House. This path was once known as Potter’s Steps.

This route became known as Potter’s Steps and is still in existence and use today. But it is on private land and is not a public right of way. We can see that in times past – the 1930s – a rural chap was expected to be able to turn his hand to anything and constructing a path like this really did involve thought in the layout, engineering in bridge construction and a large dose of hard graft and heavy labour.