The Reverend Allsopp was the first Vicar of Easterton. He was appointed in 1876, arriving with wife and the first of what grew to be a large family. We have a photo of Richard Allsopp’s youngsters. 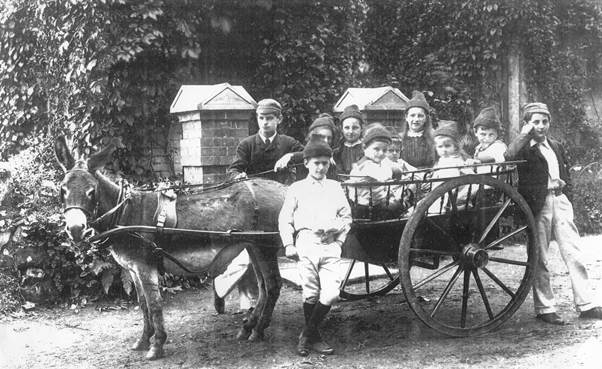 The picture dates from about 1889.

We think Jerome is the lad in light clothes in front of the cart. Jerome, sadly, was killed in World War One. In 1901 his dad had become Vicar at West Lavington so he is recorded there, rather than in Easterton where he spent his childhood.

Regular soldier Jerome was the third son of the Rev. Richard Winstanley Allsopp the vicar of West Lavington and Harrietta Baker Boileau Allsopp. He was educated at Stubbington House School where he was a keen cricketer. He was training in engineering at the outbreak of the South African War when Jerome joined the Imperial Yeomanry where he was given a commission and was severely wounded at Philippolis and received two medals with five clasps.

In May 1902 he was posted to the 1st Battalion South Lancashire Regiment and served with them in India until November 1916. While in India he married Gertrude Hilderbrand at Bombay and served as Adjutant of the South Lancashires from 1912 to 1915. He was given command of a company in March 1914 and promoted to Major and was sent to the Western Front in January 1917. In April 1917 he was given command of the 8th Battalion South Lancashire Regiment and led them at the Battle of Messines in June 1917 and the Third Battle of Ypres in August 1917 where he was mentioned in dispatches three times.

He was wounded during the latter and returned to the Front in November 1917 and in February 1918 he was transferred as commanding officer to the 2nd Battalion South Lancashire Regiment with whom he was awarded the Distinguished Service Order in April 1918.

Jerome was killed in action on Monday 27 May 1918 near Bouvancourt, northwest of Reims, France, during the Third German Offensive.

He is remembered on the Soissons Memorial and has no known grave.