Here we have a photo which was taken at the Coronation celebrations 60 years ago in 1953. 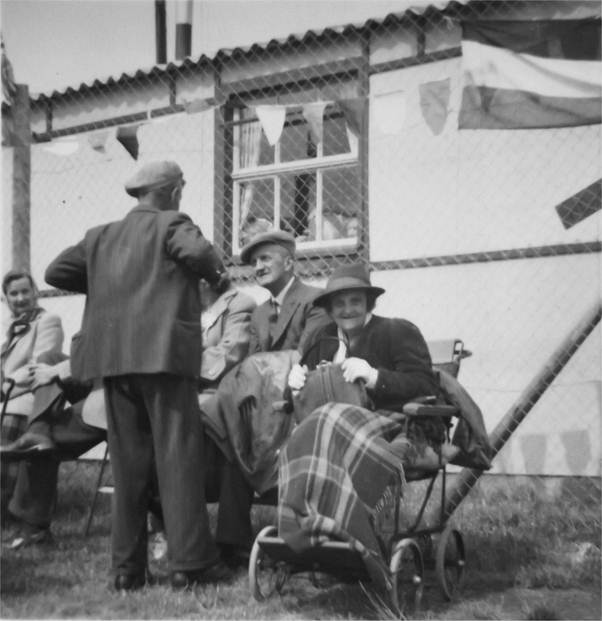 Elsie Cooper (in wheel chair) and her brother Stan next to her at the Market Lavington Coronation celebrations in 1953.

Elsie Cooper is in her wheelchair sitting next to brother, Stan. The location of the photo is the football field at the top of Northbrook.

We’d like to use this post to tell you how we try to find out more about people. First of all we try to get some estimate of the age of the people in the photo. This is often quite hard in post war pictures for people tended to look old and careworn. One of the things we’d like to decide with regard to the Coopers was whether they were born before or after 1911. We’d like to be able to locate them on a census if possible for then we can discover who the parents were. For them to be on that census they’d need to be over 42 on the photo.

Result! On the 1901 census Elsie May Cooper is the 5 year old daughter of John and Elizabeth Cooper. They lived in The Market Place and John was a blacksmith.

We can now use the wonderful FreeBMD website to locate a possible marriage between a John Cooper and an Elizabeth and again, we get a result in the shape of a marriage between John and Elizabeth Hoare in 1896. The same site can let us search for children born to a Cooper with a wife’s maiden name of Hoare – but only after 1911 (the records don’t have the maiden name before then) and again we get a result in that Stanley H Cooper was born to the couple in 1913. I also note that a Lawrie Cooper was born to the same parents in 1915 and that’s grand since the person who gave the photo is a descendant of Lawrie.

We’ve had luck, and we all need that, but we could now sort out a whole family tree should we want to.