The balustrade at the front of the old brickworks has featured before on this blog but here we have a particularly fine photo of it. 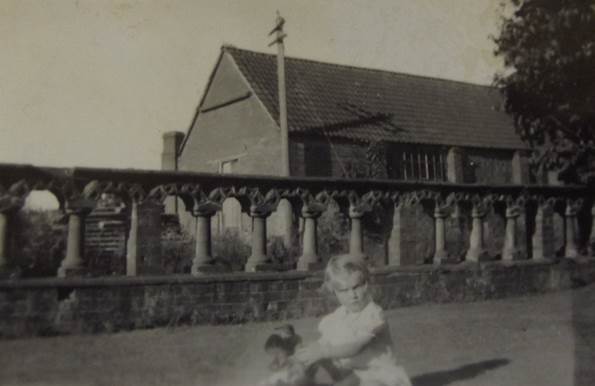 Sylvia at the brickworks – clearly showing the balustrade.

Unfortunately, we don’t have a date but the back of the photo tells us that the little girl was called Sylvia.

The balustrade is the main focus here. This had been designed by Mr Box, when he owned the brickworks, for use at Market Lavington Manor, built in the 1860s. There is a possibility that a dispute arose between Box and Pleydell Bouverie – who was having the Manor built and it is possible that Mr Box was not properly paid for the Manor’s balustrade.

Anyway, he decided to use the same pattern and make a similar balustrade for his own house, by the brickworks on Broadway.

Pleydell Bouverie was incensed by this. He claimed that a promise had been made that this pattern would only be used at his grand Manor House. Box was ‘invited’ to remove the balustrade from around the brickworks. Box refused.

The result was a court case which found in favour of Mr Box who thus kept the balustrade.

Sad to say, it is no longer there. But photos keep its memory alive.