The Easterton Echo is a small, monthly (ish) newssheet published by the Parish Council and distributed in the village. We are not quite sure when it was started but we have recently been given almost all issues from March 1987 to the present date. The March 1987 issue tells us it is the 139th issue, so presumably it had started some twelve years previously. If anyone has those early issues we’d love to have copies.

The early issues we have were produced by Sheila Judge. They were typed using a good old typewriter which, we guess, was used to cut a stencil which could be used to produce copies on an ink duplicator. How technology changes!

From time to time we’ll take a look at articles in the ‘Echo’ which usually runs to just one or two sides of closely packed typing in those earlier days and rather more pages in the more spacious newer issues. Today, as autumn approaches (the weather men say it is already with us) we are looking at a Sheila Judge poem. It’s her ‘Ode to Autumn – Easterton Style’. It comes from the September/October 1988 issue.

There is an accompanying thought – all light hearted – by Sheila about how times have changed. That comes first. 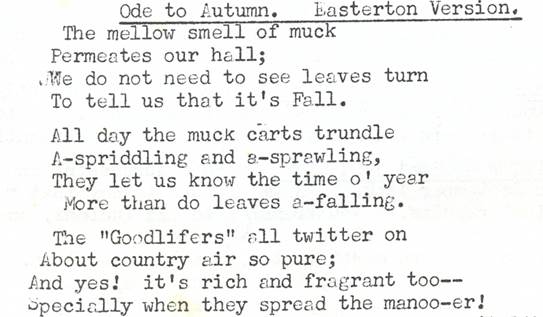 The mellow smell of muck
Permeates our hall;
We do not need to see leaves turn
To tell us that it’s Fall.

All day the muck carts trundle
A-spriddling and a-sprawling,
They let us know the time o’ year
More than do leaves a-falling

The ‘Good-lifers’ all twitter on
About country air so pure;
And yes! It’s rich and fragrant too –
Specially when they spread the manoo-er!

We suspect things have moved on again and that muck spreading hardly impinges on the village at all now.