A rather battered photo of the smithy at Easterton got a mention on these pages when we did a piece about Bert Burnett. (Click here).

Today we’ll take a look at that photo. 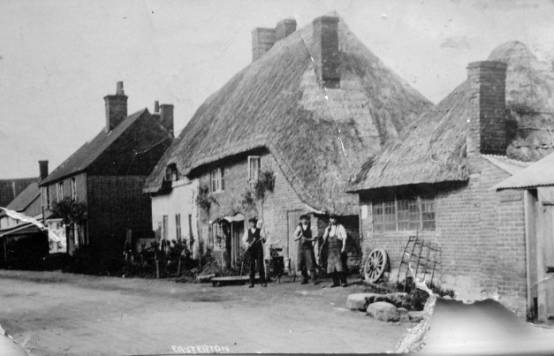 This has the hallmarks of an Alf Burgess photo so it probably dates from before 1918, when Alf died. However, his sons, who learned the business from him, may have taken on board many of Alf’s styles.

Our copy of this postcard is battered. There’s a chunk missing at bottom right – this photo makes it look as though a stream runs under the smithy – but that is just the background, behind the photo. There’s a corner gone from the bottom left as well.

But despite these faults it is a delightful, period photo with the three blacksmiths, tools in hand, standing outside the single storey thatched blacksmiths’ shop with the lovely thatched cottages beyond. Easterton High Street is in the foreground. To the left you’d be heading towards Urchfont and to the right towards Market Lavington.

The close up on smiths and smithy is not all that clear. The photo can be seen at Market Lavington Museum

Unfortunately, our original picture is not sharp enough to see who the smiths were. We expect one of them is Bert Burnett.

The smithy closed at a time of agricultural depression and when motor vehicles were beginning to make their mark on rural life. However, the Gyes of Market Lavington saw a future and bought the equipment and set up a smithy at their White Street, Market Lavington premises. And as we know they also took on young Bert Burnett, who became a highly respected smith and farrier.