The Jubilee Tea was held on Tuesday 5th June 2012. In some ways it was the most historic event of the wonderful Jubilee Weekend in Market Lavington.

To explain why – here’s a booklet about the first 100 years of Market Lavington Parish Council.

A well thumbed copy of ‘Market Lavington Parish Council – The First One Hundred Years’. There are copies of this in the museum.

This is not what sometimes gets called a slim volume. It has 107 pages crammed with information about what went on at Parish Council meetings. The front cover is by former local artist Patrick Manley and shows the old Parish Room as seen from the arch under the Workman’s Hall.

We are going to turn to the entry for 1897, which was the year of Queen Victoria’s Diamond Jubilee.

In April the Council appeared to have been bogged down in petty matters although Mssrs. Wadman and Brown suggested that a public meeting should be held to celebrate the Queen’s long reign. This suggestion met with general approbation and the meeting was fixed for 23rd April.

There was a good turn out on 23rd and the first proposal by the Revd Frith seconded by Mr. E. Notton, ” that the water supply be improved in the upper part of the village”, was not well received and was subsequently withdrawn. Then Mr. Edwin Potter moved and Dr. Lush seconded, “that a collection be taken in hand with a view to procuring a recreation ground for the village in honour of H.M.’s long reign”. This motion was carried without argument and a committee was set up there and then to deal with it.

At the beginning of June it became apparent that the acquisition of a recreation ground could not be achieved in time to form part of the Diamond Jubilee Celebrations on June 21st. Collectors were appointed to canvas the village to gather subscriptions for a dinner for the older folk and a tea for the younger. £61.0.7. was collected of which £51.10.10. was spent on the dinner and tea and £1 was paid to the bell-ringers. 500 tickets were issued for the dinner which was held in Miss Bouverie’s barn. 400 tickets were issued for the tea which was set out in the Rackets Court. After tea sports were held and there was dancing in the barn and in the adjacent field The weather was splendid Although this was not a Council managed affair it was thought that there should be some record of how Market Lavington had celebrated Queen Victoria’s 60th year on the throne. It was resolved that the balance of funds £8. 9. 9. should be set aside to form the nucleus of a fund for the proposed recreation ground.

Of course, there were differences. First of all, the Racquets Court is now a private house – so huge thanks to the owners who had the idea and who staged it. Secondly, the idea of 400 people there would probably be scary. And sadly the weather was awful.

The tea was organised as a Day Centre event but it was open to the village – and a very jolly occasion it was. 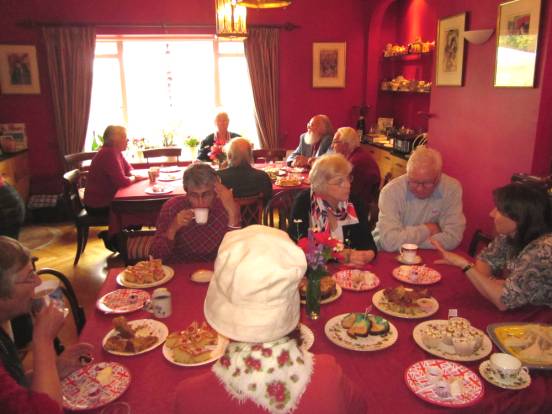 Tea at the Racquets Court – a finale for the Jubilee Weekend

Here we have some sippers of tea. The sandwiches, scones and cream and cakes were just fantastic – all home made, of course. 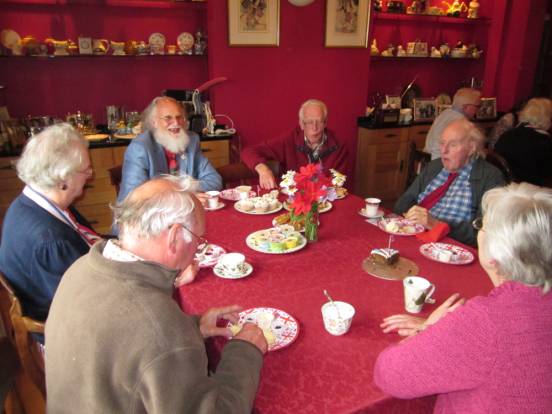 Some folk preferred to sit around a TV and watch national events. Now how amazed would their 1897 predecessors have been at such a possibility? 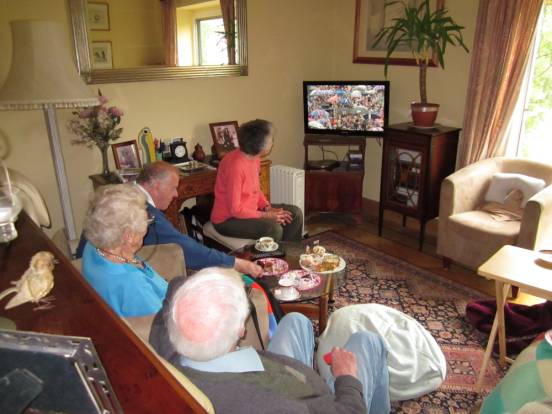 Relaxing in front of a telly was not an option in 1897.

Regulars who help at The Day Centre were on hand to serve tea. Here are Gordon and Pam. 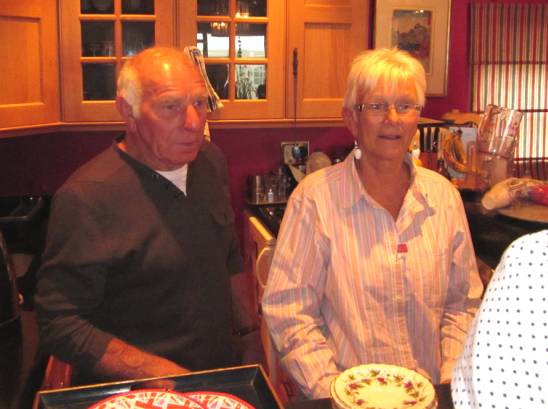 Ace cake baker Gordon and his wife, Pam, are amongst those who regularly help at The Day Centre, normally in The Old School, Market Lavington.

Sadly we have no photos of the 1897 event but at least the 2012 one is saved for future generations to see.

It was a lovely finish to a marvellous long weekend.