Just think of it. Soldiers returned from the First World War, weary, shocked and probably not in tip top health. They found their old job had gone. There was nothing else for them in the ‘land fit for heroes’. They had to apply for Parish Relief – go on the Poor Law.

At least it seems that those who could afford to pay for parish relief had to. But for hopeful recipients, there was no automatic right to any payments in cash or kind to see them through a difficult time.

At Market Lavington Museum we have an announcement of the rate set for poor relief in November 1919. 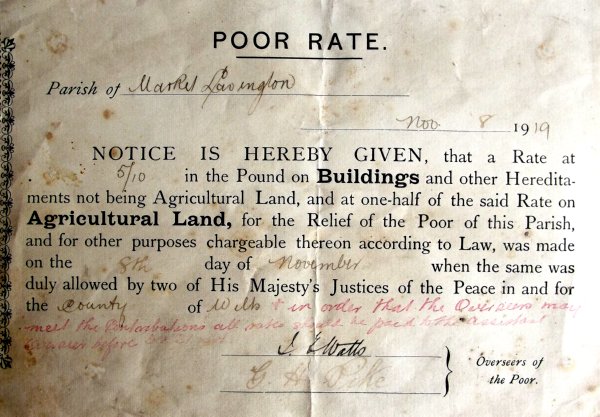 In a sense, this doesn’t tell us much. The rate was set at 5/10 in the pound – roughly 29p in the pound. But what was this figure based on. We can read the document and see it was based on buildings and land. As we understand it, somebody, somehow had come up with a notional sum of money which you might be able to get if you rented your property out. That was the value and you paid a proportion of that according to the rate set.

The overseers – the people who administered the system – in Market Lavington have signed the document.

The top signature is that of J E Watts. We know almost nothing of him. He was born in Winsford, Somerset and spent his married life as a farmer at Clyffe Pipard further north in Wiltshire. We have no record of him living in Market Lavington. However, Percy, son of James Edward was at Grove Farm in 1926, a year for which we have records. James must have felt an affinity for Market Lavington for he was buried in the churchyard. He was said to have been living in Newbury. Percy is also in St Mary’s grave yard. He died in 1955.

The other overseer, G H Pike we know much more about. He came from Trowbridge, born 1877, and his father was a cloth weaver. George’s mother died before he was adult and George, too, worked in the cloth trade as a loom warper. By 1901, George was married, with a child and was working as a butcher in Market Lavington. In 1911 he was the manager of the butcher’s shop and it was about then that it became his own business.

George was a leading light in the Congregational Church and he saw it as his role to help people in many different ways. He was involved with scouting and local football. He was ideally suited to being a poor law overseer. He’d have understood need from his own upbringing.

In the 1930s, he found himself needing to find a way to support his family when his son in law had an accident and it was suggested he’d not walk again. He was not going to return to his previous job, on the buses. It was George’s way to be generous, yet not just give money away. He bought his son in law a grocery shop which he and his wife could manage. They still had to work to keep going.

The Poor Law was eventually replaced by a national system of benefits for those in need although it wasn’t finally killed off until 1967.