Back in 1837 William Cambridge was an iron founder, agricultural engineer and inventor based where the Workmans’ Hall now stands in Market Lavington. Amongst the products made there were steam engines. These were mostly the so called portables – little work horses that could be towed from place to place to drive machinery. Such engines, and Cambridge’s other agricultural products were exported all over the world and by about 1849 Cambridge moved his operation into Bristol where costs were lower because transport was vastly better.

As far as we know, just one Cambridge engine survives. It isn’t a portable but was a barn engine made for a farm in Chitterne.  Some forty or so years ago this engine did the rounds of local shows. Our photo of the engine was taken at a rally in Seend in 1971. 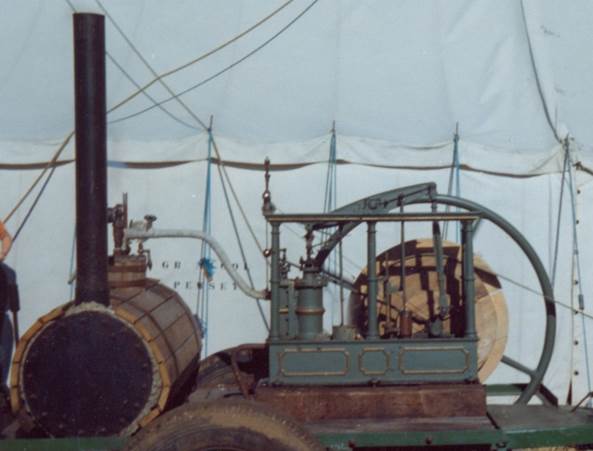 Steam engine made in Market Lavington by William Cambridge. The engine dates from 1837. The photo was taken in 1971.

The boiler, on the left is not original but on the right we have William Cambridge’s works. It’s a little beam engine – a bit like a miniature version of the engines at the Crofton pumping station on the Kennet and Avon Canal.

The engine is not at the museum and even if it was offered we do not have the space for it.

In fact, until recently the museum had no idea where this engine had got to but we have now located its whereabouts and hope to get an opportunity to create a good photographic record of it.

Maybe, one day, it will be back in steam. Perhaps we could then see it at events in Market Lavington.