We have met Edwin Davidge before on this blog. He worked at the brick works and lived at a cottage on that site. Today we look at his wife and two of their children. The photo has been given a touch of artistic colour. 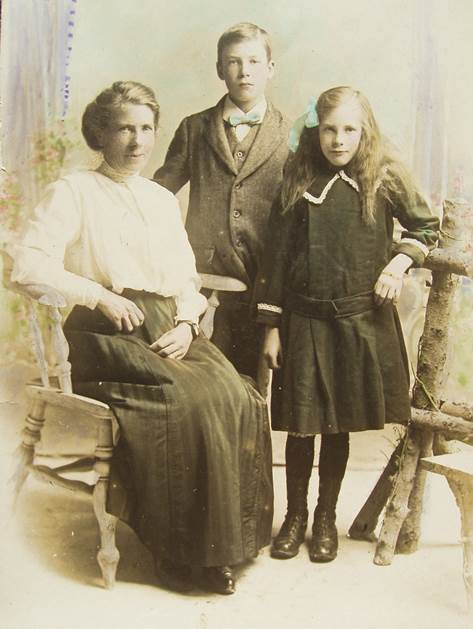 Mary Jane Davidge was born in the parish of West Lavington in about 1869. She had been Miss Mary Jane Hibberd. She married Edwin in 1888. By the time of the 1911 census she had borne Edwin 10 children of which eight were still living. The youngest pair and the pair in this photo were Herbert and Gladys. Herbert was born in around 1906 and Gladys in 1908. The photo could date from about 1918.

Mary Jane stayed a Market Lavington inhabitant from marriage until her death in 1962. She joined her husband, Edwin, who had died in 1930, in the churchyard in Market Lavington. In 1939 she lived at 26 Spin Hill. Gladys was with her. Indeed Gladys was still living there in the 1960s and when she died, in 1990, she was certainly still in the area.

We know less of Herbert. He died in 1970 in the New Forest area.