Today we look at the second photo which was recently acquired by our chairman, Peter. This one shows Victor Osmond. He was actually Robert Victor Osmond but known as Vic. His sister, Olive, was the girl who married Arthur Sainsbury who was the subject of yesterday’s blog.

Vic was born in the spring of 1898 in Stratton St Margaret. It’s no surprise to find that William, Vic’s father worked in the Swindon Railway Works. He was a carpenter’s labourer in the carriage department.

We do not know precisely when the family moved to Market Lavington, or why. They were not in our village when the 1926 electoral roll was drawn up but we’d guess they were in the village by 1932 for that was when Vic’s sister, Olive, married Arthur Sainsbury. Vic’s parents appear on the 1939 electoral roll and so, too, does Vic. He appears to live with Emily who we imagine was his wife. They were on Spin Hill. We have no information about Emily except that she died and was buried in the churchyard aged 58 in 1948.

Vic was always keen on the scout movement and we see him here, on the left, at a camp with the Lavington scouts. 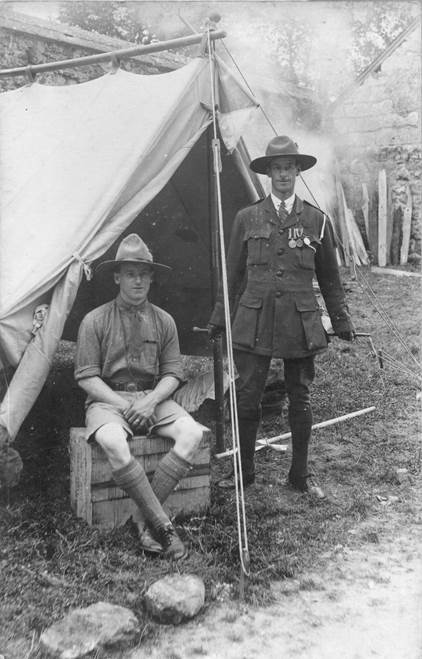 Vic Osmond on the left on a Lavington scout camp, probably in the 1930s

At the moment, we do not know who the man on the right is.

We have seen, on this blog, a photo which we think was taken at the same time. Click here.

We think this photo was mid 20s which suggests that Vic might have arrived in the village soon after that 1926 electoral roll was drawn up.

Vic worked at the brickworks.

Jim has added this comment, giving us more about Vic’s working life.

Vic user to run the newspaper business in the 1950′s and his father helped with delivery on an old bicycle with a wicker basket on the front. If you wanted something different like a particular magazine then William would pick a flower such as a daisy and thread it in the wicker basket as a memory aid. His basket was well decorated and the request always turned up! I remember William as a pleasant old gentleman.

A year after the death of Emily, Vic married Win Mundy. Village folk who knew them all seem to suggest that this was a marriage made in heaven. Vic died in 1957. Win followed him into Market Lavington churchyard in 1993.