In 1927 Winston Churchill was Chancellor of the Exchequer and he faced a situation which might be deemed similar to the one we face today. In fact, it was probably worse for the previous year there had been the long miners’ strike and the short lived general strike.

Churchill, from many accounts, was not a popular Chancellor, but maybe Alfie Alexander of Market Lavington thought he was OK for Market Lavington Museum has a picture of Archie walking alongside Winston as he made his way to deliver his budget speech on April 11th 1927. 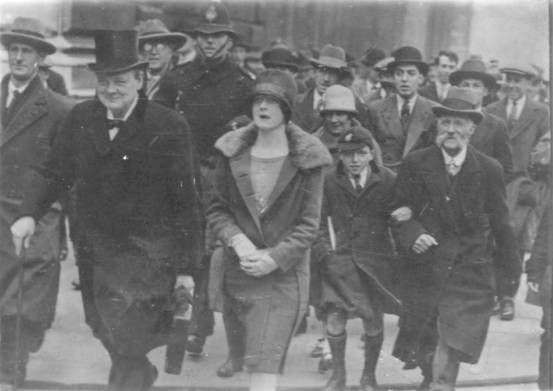 Winston Churchill with his daughter, Diana, on his way to deliver the 1927 budget speech. On the right are members of the Alexander family from Market Lavington

Alfie is on the right with his young relative in the school cap. We think the lady behind the lad is an Alexander relative as well.

In fact, Winston was really walking with his daughter, Diana and despite the grin on his face he was on his way to deliver a series of severe cuts and tax increases.

Alfie Alexander had taken his relative to hear the speech. Alfie was a farmer in Market Lavington, operating at Southcliffe in the Fiddington area although he lived on Church Street.

Alfie was born around 1864 in Urchfont. He married Sarah Norman during the third quarter of 1886.

In 1901 The Alexander family still lived at Fiddington Lane. Thirty nine year old Alfred was a farmer and employer born in Erchfont (now Urchfont). The three children at home were all Market Lavington born. Norman was 13, Daisy was 10 and Deering was aged 3.

In 1911 the family were still in Lavington. Gladys was born in 1902. She was the youngest of the four children. Alfred was a farmer.

The Alexander family continued to be involved with farming in the Lavington area until the 1970s.