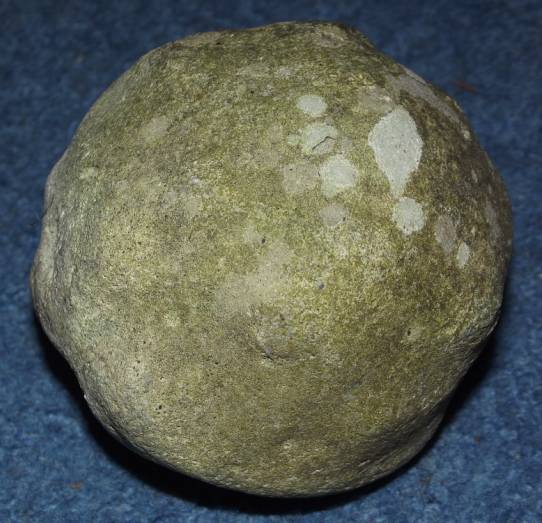 What is it? Strange rounded rock found in a garden at Northbrook, Market Lavington

It was dug up in a Northbrook garden some years ago, and recently passed to the museum for identification and as something of a curio.

We do not have a resident geologist at the museum, but we think this is a greensand concretion and as such it is naturally occurring.

The following is taken from the web site at
http://www.desertusa.com/mag98/oct/papr/geo_conc.html.

A concretion is a compact mass of mineral matter, usually spherical or disk-shaped, embedded in a host rock of a different composition. This hard, round mass of sedimentary rock cement is carried into place by ground water. Concretions, the most varied-shaped rocks of the sedimentary world, occur when a considerable amount of cementing material precipitates locally around a nucleus, often organic, such as a leaf, tooth, piece of shell or fossil.

From the 18th century these items have been regarded as curious and, often, completely wrong explanations have been given. These include ‘dinosaur eggs’ and ‘must be shaped by humans’.

Walkers in the sunken lanes through the sandstone around the Lavingtons might see concretions like this (but bigger) poking out of the cliff sides. The Jurassic Coast in our neighbouring county of Dorset has some wonderful accretions (sometimes called nodules although there is a very technical difference) at Osmington Bay near Weymouth. Take a look at
http://natureinfocus.wordpress.com/2011/06/28/giant-burger-bun-stones-at-osmington-bay/
to see the wonderful photos of these items taken by Jessica Winder.

Any further help with identifying this item or how it comes to be like it is would be greatly appreciated.