Where there’s a will…

We have a number of wills (stored electronically). This particular will is that of Robert Sainsbury who died in 1698.

Start of Robert Sainsbury’s will of 1698

This is the way wills began back then.

In the name of God Amen I Robert Sainsbury of Market Lavington in the county of Wilts labourer do…..

This will was started at the bottom of a page so we then move to the next page. 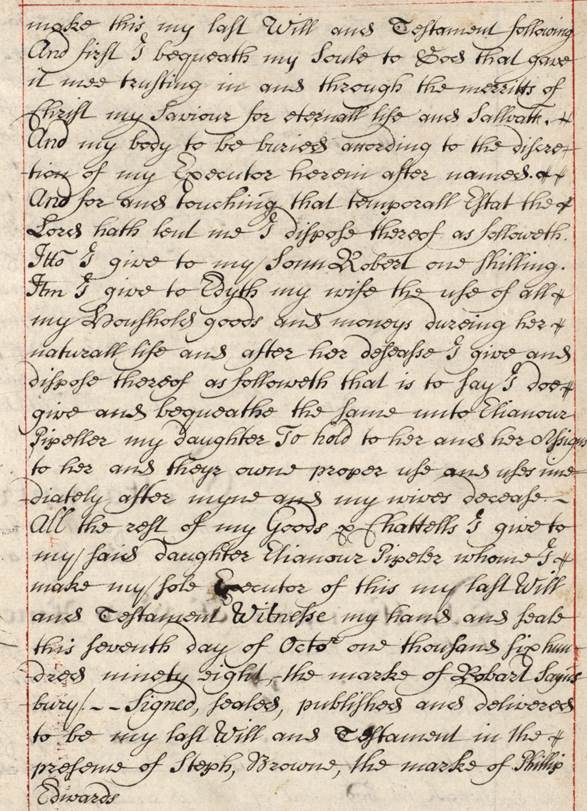 …do make this my last will and testament following

First I bequeath my soul to God that gave it me trusting in and through the merits of Christ my sviour for eternal life and salvation.

And my body to be buried according to the direction of my executor hereinafter named.

And  for and touching that temoral estate that the Lord hath lent me I dispose thereof as followeth.

I give to my son Robert one shilling.

I give to Edyth my wife the use of all my household goods and moneys during her natural life and after her decease I give and dispose thereof as followeth.

That is to say I do give and bequeathe the same unto Elianour Pipeller?? My daughter to hold to her and her assigns to her and their own proper use and uses immediately after mine and my wife’s decease.

All the rest of my goods and chattels I give to my said daughter Elianour Pipeler?? Whom I make my sole executor of this my last will and testament.

Witness my hand and seal this seventh day off October 1698.

The mark of Robert Sainsbury

Signed sealed published and delivered to be my last will and testament in the presence of Steph Browne the mark of Phillip Edwards.

The married surname of Richards daughter may well have been Piplar. People with that surname were baptised in Market Lavington in the 1680s and 90s.

And of course, we all wonder what Robert did wrong that caused him to be cut off with a shilling – actually worth about £100 today.