The market place area of Market Lavington was used for many years by agricultural engineers. Today we feature a photo which dates from the 1890s and it shows White’s Yard.

White’s bought the premises in 1893. Previously it had been the works of James  House.

Whites only stayed in Market Lavington for a few years. They moved to Devizes and became the well known firm of T. H. White. 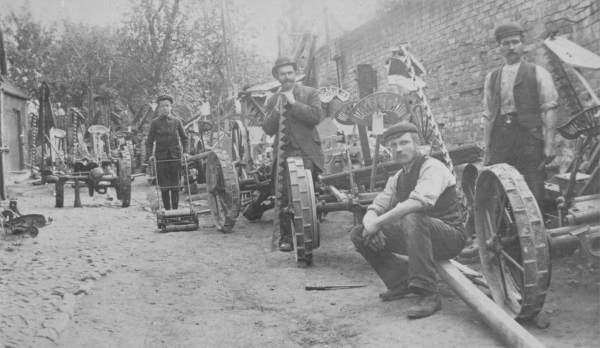 The photo shows a wonderful collection of mowers. For agricultural use these were horse drawn, of course, and with no power take off, they had to use the rotation of the wheels to drive the blades. Wheels were made to ensure they didn’t slip during field work.

The more domestic looking mower has been left with a lad and is not hugely different from hand lawnmowers which could be bought today.

As a bonus, we know that the three men were Mr Parsons, Mr Collins and Mr Cooper

The Parsons family had come from Somerset, moving to Wiltshire  in the 1880s.  Francis Parsons was a foreman agricultural machinist at the time of the 1901 census.

Mr Cooper may have been John Cooper who was described as an agricultural blacksmith on the 1901 census.

Any further information about these people would be very welcome.