In recent weeks we have looked at various items found under floorboards at 21 Church Street. Today we look at a family who may have lost some of these items.

William Hopkins was born on 4th May 1848 in Market Lavington, Wiltshire.

A John Hopkins married Sarah ‘Penchin’ on Christmas day 1847. These seem likely to be the parents of William particularly as a Sarah Ann Pincheon was baptised at Market Lavington on October 11th 1829, the daughter of John the bricklayer and his wife, Sarah.

The death of a Sarah Ann Hopkins was recorded in the Devizes district in the June quarter of 1850.

In 1851 William was aged two and lived with grandparents. His grandfather was 44 year old John Pincheon, a bricklayer who lived on White Street in Market Lavington. His wife was Sarah and two year old William had a number of aunts and uncles in the house with him – aged between 2 and 14.

So it would seem that William was brought up by his maternal grandparents where he must have seemed like a twin to his uncle Charles who was much the same age.

In 1861 William was still with grandparents John and Sarah Pincheon. Both William and his same aged Uncle Charles worked as mortar boys, presumably helping John in his work as a bricklayer.

In 1861, the thirteen year old Elizabeth Brown was a servant in Edington working for Publican Jacob Hale.

William Hopkins married Elizabeth Brown in the Devizes district in the September quarter of 1869.

We find the couple together in 1871 and living on The Spring (next to Grove Farm). William was a bricklayer journeyman and the oldest child of the union, Samuel was aged ten months.

Henry Charles Hopkins was born in about April 1877 but only lived 11 months.

The family lived at Mount Pleasant, White Street, at the time of the 1881 census. Head of the family, William, was now a master builder employing two men and two boys.

A further daughter, Lilian, was born in about 1885.

In 1891 the family lived on Church Street, next to The New Inn (In 2009 The Drummer Boy) William was now a bricklayer and builder.

In 1901 young Samuel had married, but the family, including Samuel and wife still occupied premises next to The New Inn. William was described, on this census as a general builder – an employer.

Elizabeth, the former Miss Brown, died on February 7th 1907 and is buried in the Drove Lane cemetery. But William stayed in business on Church Street as this post card, posted in 1914 shows. 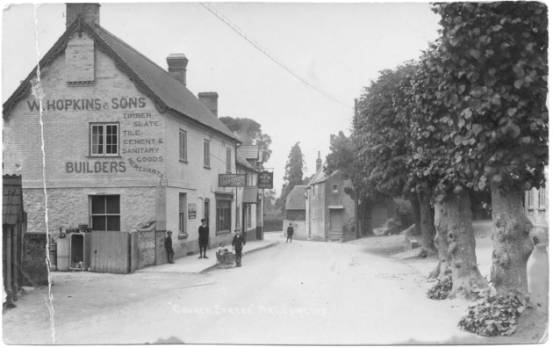 This is Number 21 Church Street.

Another photo, sadly undated, shows the shop front with some of the stock for sale on the pavement. Did members of the Hopkins family come out to get in the photo? 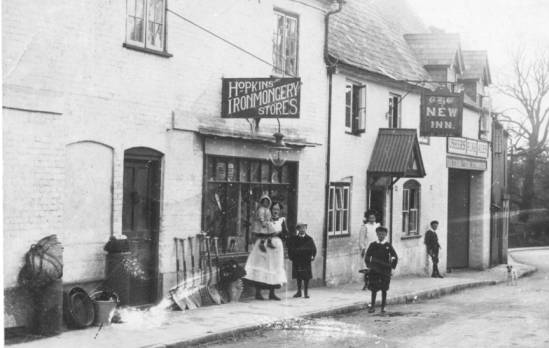 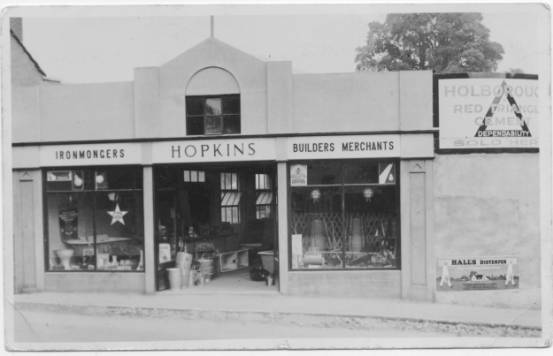 The Hopkins shop in the 1930s. This stood where Milsom Court is now.

Whether the Hopkins just needed more space or whether the premises at 21 Church Street became just a house, we are not sure. These are 1930s premises, also on Church Street, Market Lavington. Old William would have known this shop before he joined his wife in the Drove Lane cemetery having died on April 27th 1936. These premises were where Milsom Court now stands.

Members of this family, who were non-conformists as far as religion went, are buried in the Drove Lane Cemetery. 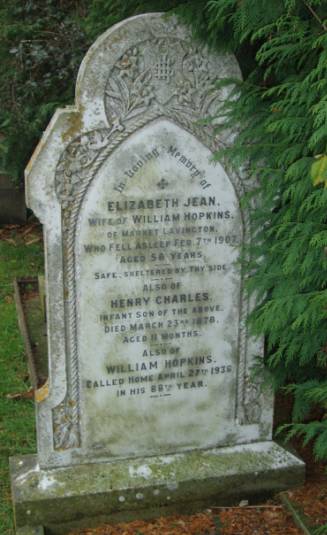